How to Attract & Retain New Dancers 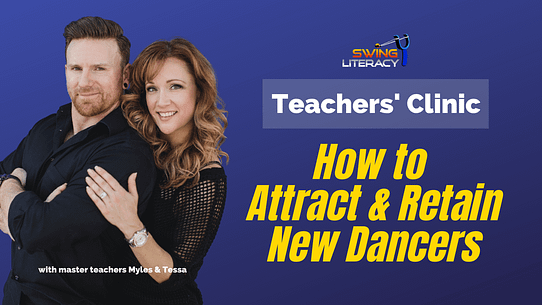 Get a turbo boost in building your student base

You're trying to build your West Coast Swing community...

But because of WCS's steep learning curve,
it can be hard to keep newbies coming back, right?

We get it - it's something WCS teachers struggle with all over the world...

...until they discover this formula... 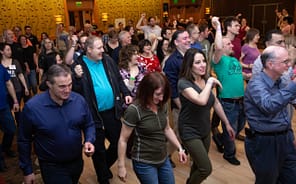 We want to teach you how we help students get hooked quicker, sign up for classes, and keep coming back for more.

...so you can grow your community!

Learn how simple it can be to...

How to Attract & Retain New Dancers

What you'll get in the clinic

Concrete ways to train students to crave technique instead of patterns

The clinic can pay for itself

The Newcomer Workshop is designed to stimulate community growth by helping a wave of new dancers have an amazing first experience with West Coast Swing that gives them a sense of success and confidence that motivates them to sign up for classes.

To help boost more newbies to follow-through by registering for classes, at the end of the workshop, we will introduce you as a local teacher and give you an opportunity to chat with and register new students for your classes right there on the spot.

Which means in this workshop, not only will you learn how to increase your revenue by retaining more students in future classes, you can generate revenue by registering some immediately.

Notice the difference within minutes

One teacher's report after participating in this Teachers' Clinic

"I recently had the privilege to assist in large back-to-back newcomer (brand new to WCS) workshops. The first workshop employed the Swing Literacy teaching method, and the next workshop used the more traditional method. Having studied both methods, I expected the Swing Literacy method to work better, but I was not prepared for just how effective it was and how quickly it worked.

During the Swing Literacy based workshop, I noticed the students were able to perform many of the skills to a level I would typically expect from more experienced dancers. Dancing with newcomers and being able to feel their elasticity and having them connect to me like an intermediate dancer was definitely a surprising experience: it was easy and enjoyable - it wasn't a chore or struggle to dance with them. I observed them smiling, laughing, keeping their eyes up, and focusing on their partners. After the workshop was over, I was impressed that they were able to sustain these skills as they practiced on their own.

The traditional-method workshop was taught by very experienced and lovable teachers, but about 10 minutes in, the atmosphere in the room changed. I noticed that the students started struggling: the usual frustrations that go along with learning dance for the first time were back. I had one couple ask me for help with the patterns that were being taught, and the leader refused to dance until he could figure out his own steps. At this point he was so frustrated that no matter what I did, whether breaking down the pattern or asking him to ignore the pattern and just dance had no effect. He was already too stressed out to dance or learn at this point: a common problem that I have seen in many classes.

When I danced with the Newcomers in the traditional workshop, many of their skills that made our dances enjoyable for me during the Swing Literacy workshop had disappeared: they stopped their momentum, they stopped using elasticity, their heads were down, looking at their own feet, and they were all focused on trying to do the patterns instead of leading or following.

As someone who has both danced and taught WCS for years I found myself a little confused during the traditional method workshop - I can only wonder how much the Newcomers must have been struggling at that point. From my personal experience during these workshops I would definitely say that the Swing Literacy method taught WCS in a way that newcomers could easily understand and allowed them to not only progress faster but also to enjoy their experience far more than the traditional method of teaching."

What more teachers have said...

Right after I took the Game Changer Teachers' Clinic, I started to apply just a tiny chunk of what was discussed and... bingo! It was a Game Changer right away for my students.Yassssss!!! Awesome teachers course... I highly suggest you take it!!!

As a Swing Literacy alum, I took the Game Changer Teachers' Clinic as a refresher, and so glad I did. It reinforced my belief in the methods and the importance of giving students the fundamental movement skills they need to execute a move before teaching the move. Also, the importance of making instruction FUN and simple! I highly recommend this training to anyone who wants to improve their teaching skills in WCS and any dance!!

A huge ballroom, FULL of hundreds of brand new dancers. You've been helping Myles & Tessa teach for the past hour, and every dancer is smiling and looking at each other as they do basic patterns on time with great elasticity and flow, never looking down at their feet or stopping because they forgot the steps.

You observe and take notes throughout the workshop so you can followup with students afterward and continue this surprisingly effective method in your own classes. Each student you engage with has better connection than many dancers you know who have been dancing for 6 months.

By the end of the workshop, the students are feeling budding confidence that they could really get into this new hobby. They've found a new high and they are chomping at the bit to sign up for classes. Then Myles & Tessa tell introduce them all to you as a teacher that is taking registrations for classes starting next month.

The question is, are you going to take advantage of this opportunity for professional training and advertising for your teaching business?

Since 2009, they have been teaching online comprehensive WCS training programs for teachers and dancers using a progressive skill development method that is changing the game of how West Coast Swing is taught all over the world:

Swing Literacy is a universally applicable teaching system that delivers the underestimated foundations of dance in the most effective order to improve students' success and retention regardless of their chosen style.

This revolutionary method takes traditional dance teaching and turns it upside down, prioritizing skill development over patterns and footwork and delivering it with real pedagogical best practices.

The results? Teachers finally see the big picture, and how they can help students "get it" quicker, have more fun sooner, and build solid skills that progress them faster.

This teachers' clinic is a tiny sample of the signature Swing Literacy development method Myles & Tessa use to help teachers #teachWCSsmarter.